Out On The Tiles, A Celebration Of John Henry Bonham 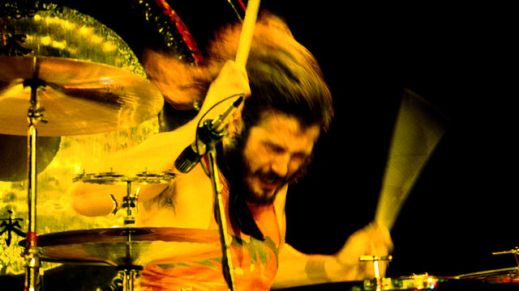 33 years ago today we lost a man who singlehandedly revolutionized not only drumming, but modern music as a whole. This man combined extreme power, finesse, musicality, and dynamics to create something not just close to impossible to replicate, but something that has inspired drummers to try for decades. This man’s influence over the modern drummer’s approach to the kit is so far-reaching that you can’t even listen to a Taylor Swift record without hearing something he inspired. This man’s name is John Henry Bonham, the drummer of Led Zeppelin, and he is arguably the greatest drummer of all time.

Although this post falls on the anniversary of Bonham’s death, the main focus is to celebrate his life, as well as his influence that still lives on today in almost every record that has drums on it. Part of Bonham’s greatness lies in the fact that he was not only a drummer, but a songwriter, a musician, and a man who was more passionate about his instrument than most of us are about breathing. The intro of “Good Times, Bad Times” is a perfect example of this. Bonham was acutely aware of song structure, and although he obviously could’ve gone crazy on that intro, he didn’t. He added something new every bar, he built tension and anticipation, and when he released into the song it was awe inspiring. Another very important aspect of Bonham’s playing is also evident in “Good Times, Bad Times” which is the space he left for John Paul Jones (Zep’s bassist if you didn’t know)to fill. The two worked tightly together on every Zeppelin tune to create what is most likely the most solid foundation for a musical group that has ever been laid down.

The power and control Bonzo had over the drum kit was phenomenal, but overwhelming for some. In fact he was told by Zella Studios’ engineer Johnny Haynes that he was “unrecordable” because of how loud and bombastic his playing was. But it was this that set him apart from other drummers, allowing him to fully and freely express himself and all of his influences. Bonham could bring together grooves from Clyde Stubblefield, Buddy Rich, and Earl Palmer all in one song and still create something completely original and new, something that most drummers still have trouble with today.

There is so much more to be said about John Bonham, and we here at Ventura Drum School are huge fans, so expect to hear it, but today is about celebrating his life, not breaking down “Fool In The Rain” note by note (look for that soon). So go listen to some Zeppelin, go play your drums, and most importantly, be grateful that this planet was ever walked upon by Bonham, especially his right foot.